The first thing I thought when I landed in India was “wow, I can’t believe I’m here.” About 2 seconds later was the thought “I want to go home.” Yep, that’s how I roll. A mass of contradictions. After a whirlwind month of not very pleasant pressing tasks and a last minute “hallelujah my visa came through” day, I threw my wallet and passport into a carry on and jumped on the plane from the frigid East Coast of USA only to land in a steamy 90 degree India. Did I mention I’m not really a summer person?

So, why am I here? What was I thinking? I was thinking to immerse myself in the culture of the birthplace of yoga. To put myself so far outside my comfort zone that the illusion of control I feel in my daily life would be shattered. To practice with no other worries. To ride in a rickshaw and drink tea and eat thali and breathe it all in.

And, 6 days later. That’s exactly what I’ve done. Landing in India IS the contradiction I felt inside. The colors, smells and sounds are wildly intrusive and somehow soothing at the same time. The incense combined with I-don’t-know-what on the air is weirdly soothing.

For me, after 6 years of not visiting India, being here is like living through a half-remembered dream. We eat brunch and “linner”. We hire a personal rickshaw driver. We go to bed early, wake very early, brush our teeth with bottled water. In the heat of the day sometimes we hide in the room and sometimes bask in the sun by the (OMG) Indian Ocean. And sometimes we troll the shops for carvings and statues and shiny things late into the evening. Mostly though we do just….whatever. Let our brains unclench.

What I’ve found about myself just now is that I was trying very hard back at home, for a couple of months, not to grip, to stress, to panic. Outwardly and in the practice room I seemed calm, did what I had to do, breathed steadily on my mat and dealt with my tax audit and made dinner. Normal. But inside I was revving the engine pretty high. You can’t fool your body. It knows. And eventually, something has gotta give.

Well, here in crazy, unpredictable Kovalam, I have unclenched my brain, just a little. But I feel the complete unfurling coming up on the horizon. So, as I drink the simple yet delicious cardamom tea in front of me, something that just can’t seem to be replicated with New York milk and tea and water, I sigh a deep sigh, smile a big smile and settle deeply into the moment. One day this too will feel like a dream. 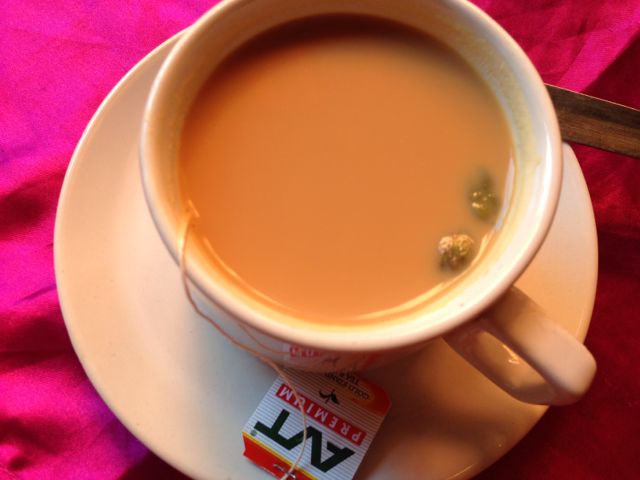