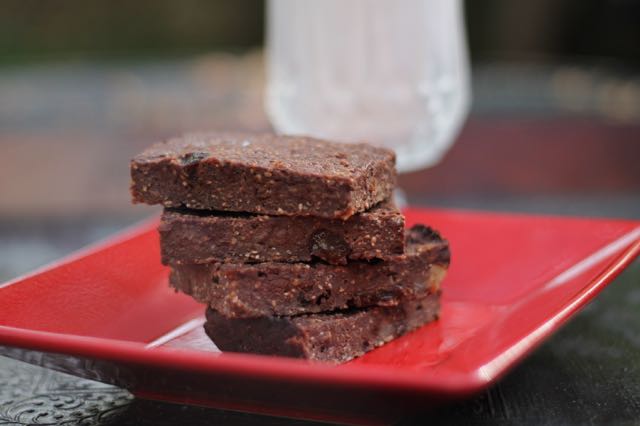 I come to you with just a recipe today. No deep thoughts. Well, maybe only deep, dark chocolate ones.

Let me back up. When your teacher asks you to do something, you do it, right? Fortunately, I like what was asked of me recently. I was asked to make breakfast treats for the hungry yogis at AYNY, a pretty fun and rewarding task. I mostly try to make the treats healthy. Indulgently healthy perhaps, but still healthy. Drool-worthy, but still healthy. Rich and satisfying, but…you get the idea.

These bars/bread/squares are that. Mostly. Somehow these ones ended up being a little bit more on the indulgent side. Oops. But it’s ok. I mean, they have chia seeds in them! That’ll do for the healthy part, right?

These were inspired by the amazing Angela at Oh She Glows. Her Soft and Chewy Granola Bars looked so good I had to make them right away! The first time they came out a little too soft, so I dehydrated them for a while after baking, which helped, but then they were small. So I thought I’d add a little banana, which acts as a great binder in place of egg, if you want to vegan-ify things (though the chia seeds do that too), and it added some fluff and allowed me to back off the super sweet dates a bit. Plus I wanted to make a much bigger batch at one time. And then I thought, hmm, what if it were chocolate flavored? But then, wouldn’t it need a little ‘something something extra’ in the mix to punch up that cacao? And as long as I was at it, what about some chocolate chips?

Yeah, I went all the way there with the chocolate, and this became an entirely new recipe.

The ‘bread’ as I call it is the result. It has the texture and a little bit of the flavor of a sprouted bread (according to the few AYNY testers I asked). But it’s a little sweeter, like a cross between a date bar and a banana bread. It’s great on its own, but would be lovely spread with some nut butter and a few slices of fresh banana too. And it’s not so terribly sweet and indulgent after all. The only refined sugar is in the small amount of semi-sweet chocolate chips.

It will keep at room temperature for a few days, but is better stored in the fridge and brought to room temperature before serving in the warmer months. And I bet it freezes well, cut into squares, so you could defrost individual portions. But really, I don’t think it will be around long enough to matter. 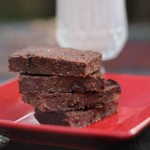 These are amazing just as written, but you could also leave out the chocolate chips, use cranberries or raisins instead of cherries and sub sunflower and pumpkin seeds for the walnuts (especially if you are allergic to nuts).

I like it plain, but suspect some cashew, almond or peanut butter would make amazing little sandwiches!

My banana was huge, but don't worry about it too much. One really big one, two small, one and a half medium, they'll all work.

And, I've used both whole chia seeds and chia powder to good effect. I like the powder better just because it doesn't stick in my teeth as much but use whichever you have, or grind your own in your high-speed blender or coffee grinder.

All this is a lot of writing, but the recipe is super easy and comes together in a flash. Go make it!