I know many of you are sad to see summer go. Even though it’s still hot many days, September just seems like fall. Back to school, back to full work weeks (are there half day Fridays in the summer anywhere else, or is it just NYC?), back to business as usual.

But although I often miss al fresco dining, the late evening glass of wine on the porch (while it’s still light out), the relaxed feeling that seems to abound, I don’t miss the hot weather. Humidity, bugs, super-hot days, they are not my favorites. No, I’m a fall girl. I love that crisp breeze that just begs for a soft sweater and cozy scarf. I feel energized by the coolish temperatures, and I seem to take more walks. And I still dine al fresco, by the way. Love to breathe that crisp air! Just give me one of those standing heater thingies…

I also happen to love the flavors and spices of fall. Although I’m not a stickler for eating according to the weather—I ate sautéed collards all August and drank cold smoothies throughout last winter, it’s just what I craved—I do like to include seasonal produce, and for fall anyway, I LOVE the flavors and race toward them. Pumpkin? Cinnamon? Ginger? Apples? Bring em on! And don’t stop when Thanksgiving is over. Keep it all coming until I turn into a pumpkin myself!

So, last week it was cold on our mountain for the first time. 52 degrees when I woke up in the morning! Well, ok, that’s not so cold, but lots colder than 90. Right away I knew what I wanted. My absolute favorite smoothie. One that hadn’t seemed appropriate in ages somehow.

This is really my signature smoothie. Not earth shattering, maybe, but tweaked just so, to make it entirely mine and just exactly what I like. I call it vegan nog, which would suggest a wintry blend, but really, nutmeg and cinnamon can be fall or winter, and I’ll take them now thanks! 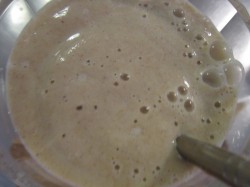 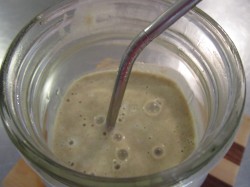 So many “nog” recipes I’ve seen use banana to thicken them, which just makes them taste like banana to me. Sometimes they use canned coconut milk, which yes, adds richness, but again, doesn’t taste quite right. Too tropical. Soy milk or those soy versions of nog on the shelf? Um, no thanks.

So, after much trial and error, I realized the answer was right in front of me and so simple. Take my basic cashew milk recipe and blend it with the neutral, natural thickener: AVOCADO. The first time I made this, the Big Hunky Husband (we’ll call him the BHH from now on) wouldn’t try it. Because he knew avocado was in there he was sure it would be awful. The next time, we were in the car and he was too hungry to refuse. CRAP! He liked it. Drank half of it. I had to share!

It’s rich, indulgent, and I usually drink the whole thing for breakfast. But if you share, it can be a not-so-indulgent dessert. And, for a rare treat, I must say, it’s pretty great with a little rum. J 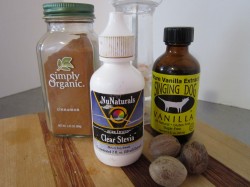 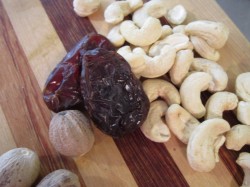 For a Vitamx or other high-speed blender: Put all ingredients in the conainer and blend VERY well, till frothy and completely smooth. I probably use at least 2tsps each of cinnamon and nutmeg, but then I love those spices. Start small and add. The sea salt really punches the whole thing up several notches. Don’t skip it! But also, don’t use (icky) conventional salt.

Soak cashews for at least 2 hours. Drain. Then add all ingredients to the blender and blend a LONG time. 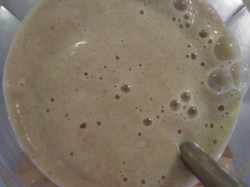 Despite all the notes, this is the easiest recipe of all time. I just want to give you guys all the options! I make this all the time, now even more since TBHH likes it. I don’t think I’ll ever get bored of this one.

Reader Feedback: Do you love or hate fall? What about fall flavors, do they ease the pain of summer’s passing?

And with that, I’m off to make a sweet potato. Ahhh, the joys of turning on the stove.

PS: Pardon the appearance here while I learn to take better food photos. This smoothie is so much more delicious than I seem to be able to capture today! I’m willing to trade smoothies for lessons. :)))